Check Me Out and Interact With Me On Social Media!

Go here for the VIDEO!

November seems so long ago. That's when I agreed to help the Sigma Nu fraternity from UAHuntsville to put on a benefit tournament for American Heart Association.

It was a great way for me to represent PowerTeam Lures(I know yall are sick of the plugs...) as a member of their Pro Staff. In fact, it was really the first tournament I had fished, aside from the NATA, which was a hard bait dominated tournament.

Anyway, the date rolled around and...fortunately, I found myself with a free Friday to prefish. If you have read about my other attempts to prefish, you will see that I do little more than eliminate water, much less get on a pattern.

But...I did. And while I don't have a post of it....yet....let me assure you that I stumbled upon a pattern that I was pretty sure we wouldn't see used for another few months. I was sure, however, that the Bama Rig would be tossed all over the lake, so I had ruled it out.

Anyway, to save some time, I fished Friday with Jon and we put up 25 pounds including a 6 pound bucket head on the last cast.

So, when I called Josh and told him that I had filled out a limit mostly on rattlebaits, he wasn't surprised. When I told him that I culled up 2-3 times with a PowerTeam 6" Gator....he was a little taken aback. And why not? Sure, a lizard type bait is a staple in spawn, post spawn and summer patterns. But not in March. 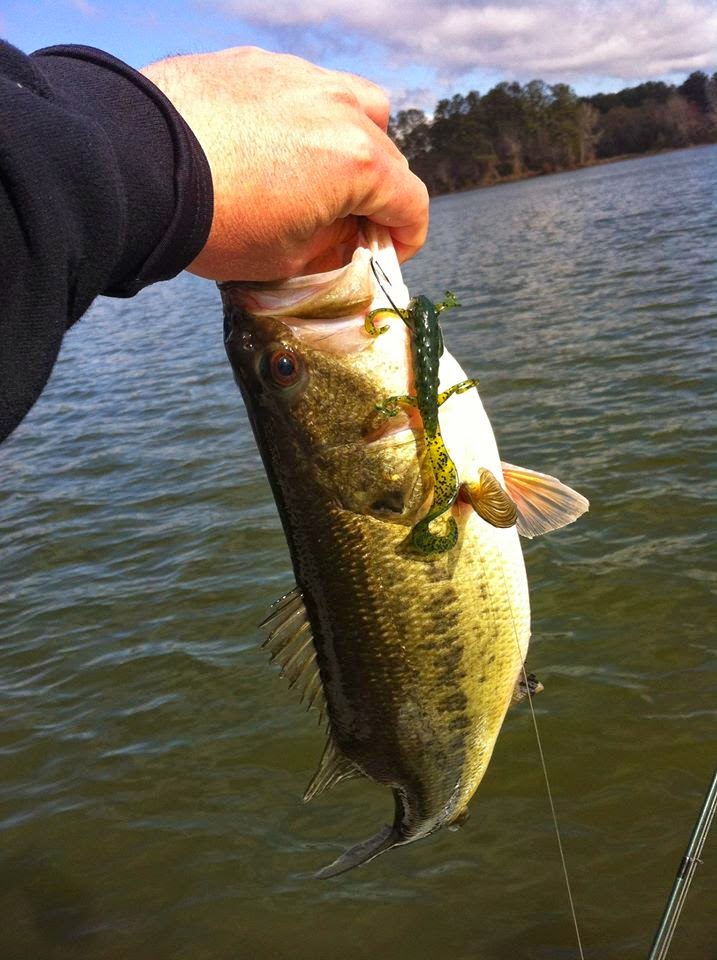 Now. The Gator ISN'T a standard lizard, like you would see from Zoom. See the ridges on the tail? That gives it a "thump" in the water. The ridges make it stiffer, so it doesn't just twirl around. It paddles. Also, the legs are backwards from most other baits. I also like the very realistic bumps on it's back and the rib cage-like side profile.

Anyway, that was our plan. Rattle baits in the morning, Gators in the afternoon.

We also knew that the Alabama Highschool tournament was also going to be out of state park and they were expecting 250++ boats. Plus any other tournaments. So, we decided it wise to put in at Seibold and motor over. Boy, was that a smart decision! Props to Josh for thinking of it!

So, we arrived at Seibold and there wasn't another trailer in the lot. We motored across. And man, the road that circles the mountain below the State Park looked like a fireworm. It snaked back and forth...truck-trailor-truck. And it was PACKED at the docks.

We found Jared, the gentleman running the show. I dropped off some PTL Giftcards that PTL had graciously donated, as well as some baits that I provided out of my own pocket.

We fished the Seibold area, starting where Jon and I fished the morning before where I caught a 4.5 and several 3 pound fish early. I threw the rattlebait while Josh threw a Bama rig, mostly. After a while, he picked up a rattle bait and tossed it. Yo-Yo'd it. Picked up a fish and slammed the rod home....just to break the line....NOT the way to start!

A few minutes later, we headed to where I had caught the 6 the previous day. We put the boat in 12 foot of water and threw to 8 feet. I decided that the Gator had worked there 16 hours ago...maybe it would work again.

And so it did. I had a solid THUMP and I hammered it. I fought it for a second and had almost given up on it being a solid fish until it pulled back. And I quickly yelled at Josh to GET THE NETTTTTTTTT!!!!

I tell ya. I am throwing this new St. Croix Triumph rod in Medium Fast with the new Skeet Reese reel. And that rod is deceptive. It makes big fish feel small and small fish feel big!

Anyway, boated it and we were off! It was a 5+ fish. THAT'S the way to start the day!

Josh immediately picked up his lizard bait and started throwing it....right after he let me douse it in Hog Tonic.


Now, I am not hard core about scents. But, I believe they are very useful in cold muddy water, which was what we were fishing.  He was throwing a Zoom in an almost identical color as I. He quickly picked up keeper #2. So, we figured  that the lizard was the way to go.

That was sort of correct. After we moved to a new place, I quickly picked up fish 3 and 4. A non-keeper. And it was 5:1 PTL vs Zoom. We made a deal that if I caught another one, he would swap. So, I did. And while it didn't measure, it proved a point. So, I gave him one of the Gators.

Quick aside...I was Facebooking the whole day, updating when we caught our keepers...etc. So, when he swapped, I made a status up date. I was finishing up when he made his first cast....and caught keeper #5! It was HILARIOUS! And Lord strike me dead if I am lying. It was a RIOT!

We quickly found out that we could go anywhere that had 12 feet adjacent to 7 feet with grass and catch fish. So, we started hopping around. But, the 3-4 foot waves made it impossible to run to places that we knew. So, we started fishing new places around Seibold. Each new place yielded a fish or two. And while we did catch 3-4 fish an hour, the size started to plummet. It got to where we were only catching dinks.

We were sitting around 16 pounds. We hadn't culled up in a long time. And the bites were coming slower. So, Josh picked up the brand new Swinging Hammer from PTL. If you didn't know, this bait came out Wednesday. Which is when I ordered. I received them Friday night. SO, unless you went to PTL and bought them, you couldn't get them faster than I.  But, I hadn't caught any fish on it. Heck. I hadn't thrown it!

But Josh went out on a limb and started chunking it. It took maybe 5 minutes. He caught one that was a small upgrade. Then on the next cast, he caught another. It didn't help, but it sure gave us the sign. So, I picked mine up and threw it. 1st cast...no lie. Caught a fish. Again, no help...but we caught 5 fish in 5 minutes.

Again, numbers are great, but they don't win tournaments. We were hurting for another good fish.

We tried a new place that I had heard about and while he threw the Swinging Hammer, I picked up the Gator again..since it seemed to produce bigger fish. And, 2pm the day before was win I caught the big one. We also noticed that the bigger fish came out of 10-12 feet instead of 8-10 feet.

So, when we got into an area that was 12 feet deep with grass, I thought I had a good chance at a big cull.

I was dragging it on the bottom when one THUMPED it. If you don't know...little fish do the "tap tap tap", which is them chomping on a bait to make it fit in their mouth. A quality fish doesn't do that. It opens its mouth and inhales the bait.

I leaned back on the fish. It leaned back into me. And broke the line. I won't speculate on how big it was. It doesn't matter.

I was destroyed. There is no getting over that.

Josh made 1 more cast with the  PowerTeam Lures Swinging Hammer. A fish destroyed it. Initially we thought it would be another dink...but when it jumped, we knew it was a cull up fish. I dipped it and we had boated a 4.5 pounder that culled up a 2 pounder. That's a heck of a cull!


We ran back to the ramp where we discovered that the day had been extremely difficult for most everyone. In fact, only about 5 boats weighed in a limit. We weighed in right at 19 pounds. That was good enough for 3rd place. It took 23 pounds to win and 21 for 2nd. Big fish was about 6.5 pounds.

Jim, whom you may remember from some of my videos, and his 2 other friends were the boat to win. I know that sounds funny, but this tournament allowed you to fish 3 to a boat. Which is different and kinda cool. Maybe we should have done that! HAHA!

Anyway. We ended up catching 25 fish or so. Many of those were good fish. But, the majority were buck bass that were prestaging. I have an inclination that the females are still in 12 feet. All but 1 fish were caught on PTL baits. Most of those were on the gator.

As you can see, we got good videos...though the GoPro shows its bad side again. The GoPros are really bad about shutting on and off at odd times....and that stinks when you are expecting to have video of 20 or so fish and you have video of 5. Oh well.


Quick note...almost forgot! I took care of myself this weekend and stayed covered up. Skin cancer runs in my family. But...the one thing I didn't cover up..... 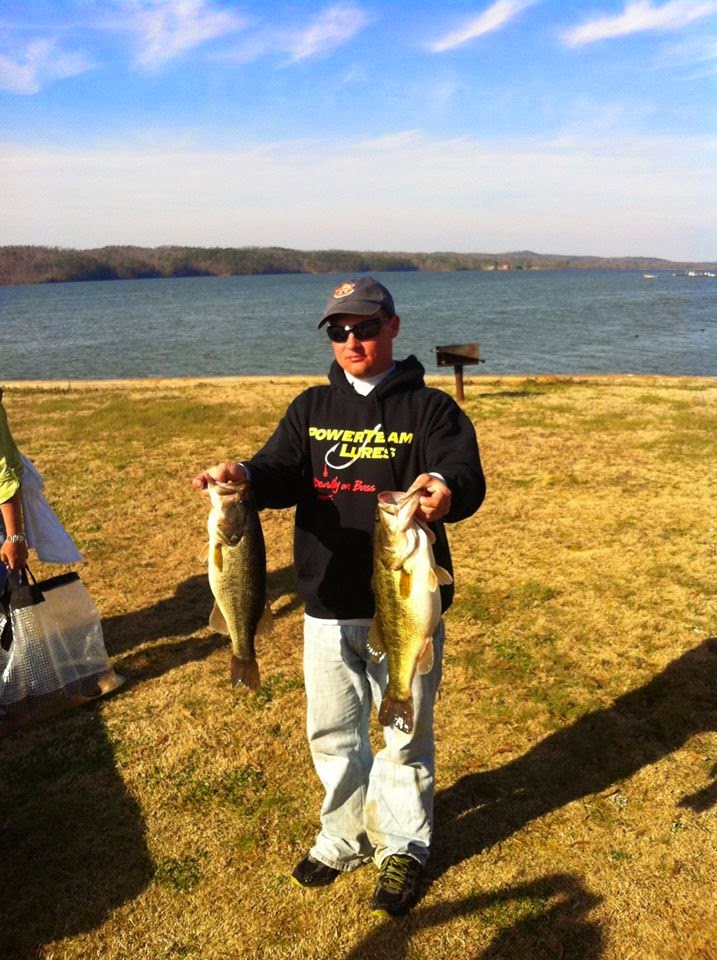